Adding a new entertainment spot for residents and visitors to take part in normally brings a boost for local tourism and as the county begins constructing a new mountain bike trail, they're hoping to see the effects reach further for years to come.

With the help of a NC Parks-Recreational Trails grant, Onslow County has began constructing a new mountain bike park called Big Branch Bike Park, located within the existing Burton Park. The park will also feature a cross-country running section and will cost $450,000 to build.

Because of where the land sits, county officials explained it was not practical to build structures of any kind, however with the roaming hills and wetlands from Big Branch Creek, a mountain bike trail was the best idea.

Assistant County Manager Ben Warren along with consultants from local bike clubs have worked on the idea for two years. After seeing research which showed mountain biking was the number three outdoor activity in 2019, grant writing began as Onslow County Parks and Recreation were awarded the RTP Grant for just under $250,000 in December.

The remainder of the funds came from county tourism dollars, according to a news release. Those funds are used to promote tourism in Onslow. 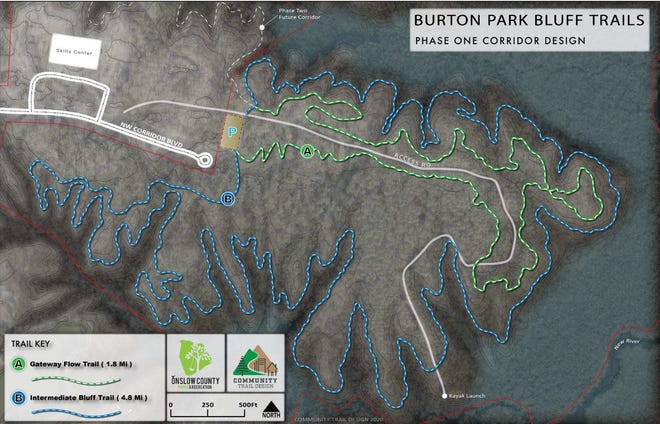 Currently there are two bike trails in Onslow, one on base at Camp Lejeune and the other is maintained by the City of Jacksonville at Jacksonville Commons. With a new bypass extension around the commons to Ramsey Road expected to take out the bike trail over the next several years, Big Branch Park will eventually be the only public accessible bike trail in the county.

"The Outdoor Industry Association did a nationwide survey which indicated mountain biking was one of the top 3 outdoor activities for participants six years or older. We had some local interest who talked to county staff about constructing a trail as well," Warren said. "After that, we began looking at county owned properties to help minimize the cost of the trail."

Community Trail Design LLC from Charlotte are the lead builders for the trail and are expected to begin phase 1 of construction in early March. The trail could be completed before July at the latest. According to their website, the company described the area as a "extremely unique terrain with just the right amount of topo and soil structure to develop a true bench cut style of trail."